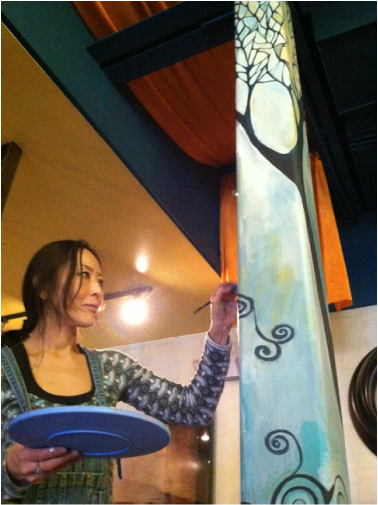 Artist Statement
"The spiritual energy in me expresses on my canvas.
It possesses a universal appeal express through oil/acrylic paintings.
I am physically and emotionally involved with my art,
I feed off of that expressive energy and the artwork begins to take off organic shapes and movement, lyrical and mystical way.

I strive to express positive energy, power and spirits.
My mission is fulfilled when I create the art that communicates with my heart to others. I value the power of Imagination, because it's my reality.


Artist Bio
Manami Yagashiro Lingerfelt was born in Japan and grew up in Tokyo, graduating from Tokyo Musashino Art College in 1985. She began her art career in Tokyo, Japan as a graphic designer and illustrator with major magazines and newspapers. However, she became increasingly displeased with her career and her life and decided to explore the world, dwelling briefly in places such as India, Nepal, Sweden and other parts of Asia and Europe from 1987-1997.
In year 2003 she moved to America with her first born daughter Maria to begin a new career as an artist. She graduated College of the Arts (COTA) at Kennesaw States University, GA, U.S.A. 2015. She now calls Dallas, Georgia home and has produced hundreds paintings inspired by the love of life and the happiness that now fills her heart. She has been featured in exhibits in both the United States and Japan and is a continuing participation in art shows and in publications.


Ultimately, Manami Lingerfelt`s mission is to provide a glimpse of the joyous beauty of life, and to spread this happiness to the world around us.